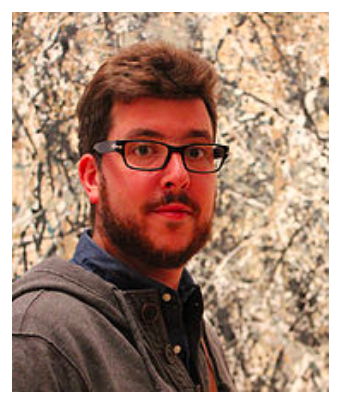 Paper conservation is an exciting and challenging field that involves the examination, interpretation, analysis and treatment of cultural, historic and artistic paper objects. Among paper objects, a large part includes graphic, photographic and film artworks and documents made of translucent or transparent supports, such as thin papers and tracing papers, that are omnipresent in archives and museum collections across the whole world. However, these supports are delicate and fragile and the artworks and documents made of these materials often have many structural alterations. This can be a major problem for museum curators and conservation professionals, especially for handling, consultation, digitization or exhibition. In many cases, the traditional repair methods are not completely adapted to solve some of these specific problems.

Our focus is the study and the application in paper conservation of nanocellulose films, also called nanopapers, using microfibrillated cellulose. The first application of nanocellulose films on museum objects was performed in 2014 on a series of viewing slides from the mid-19th century belonging to the French Museum of Cinema (La Cinémathèque française) and was pursued on tracing papers and animation cels with promising results. This is not really surprising since these new materials have very interesting properties for their use in art conservation. 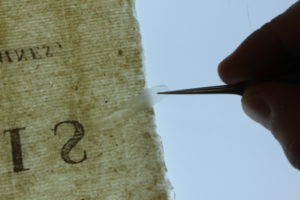 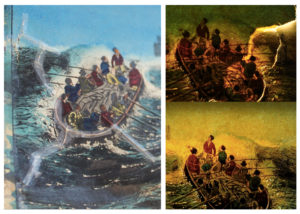 Fig. 3: Recto of one slide in reflected light (left) and in transmitted light before and after treatment (right) (© Remy Dreyfuss-Deseigne – La Cinémathèque française)

For instance, nanocellulose films are made of pure cellulose pulp without lignin or any chemical or enzymatic pretreatment. Furthermore, they have a neutral pH (close to 7.0). The purity of mending materials is a stability criterion that is very important in the conservation of artworks and docu­ments on paper. In addition, nanocellulose films can effectively transmit light and can be as transparent as a polyester film. Also, these materials have a high mechanical strength since they are composed of long microfibrils that are extremely thin (with a diameter from 5 to 30 nm) and denser than regular fibers.

The use of nanocellulose film already proved to be the most effective solution for some specific problems experienced with museum objects and could be a perfect solution to other problems visible on a wide range of media, such as graphic, photographic and cinematographic artworks and documents, old or contemporary, made of translucent or transparent sup­ports. In 2018 we are pleased to start a partnership with Weidmann Fiber Technology and to introduce their nanomaterials to conservators through some workshops like the coming ones that are planned in May and July at the National Archives, London and at the Museum of Fine Arts, Boston.